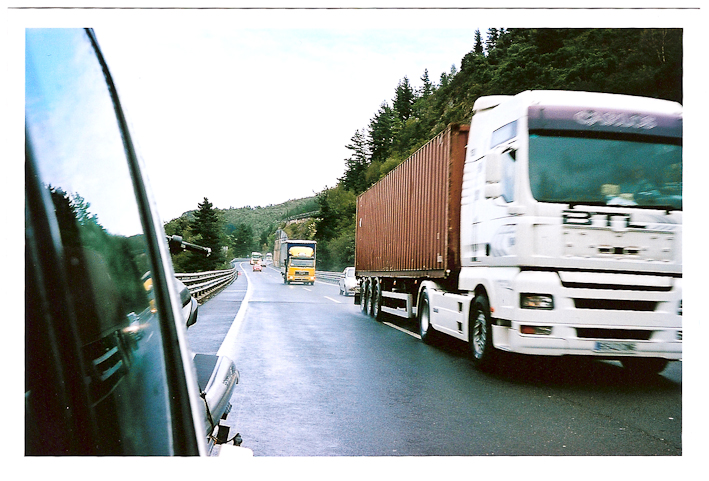 I went for milk earlier that morning, only to be greeted by 100km/h winds & torrential rain from every direction. “Welcome to the end of the world”, I thought..
After compiling people, a jetski and a trailer we made our final stop.. and BOOM outta there!
On the road destination Peniche, Portugal.. We were about a hour in to a 10 hour trip to the 2010 Rip Curl Pro in Portugal.. rolling smooth… too smooth.
Escaping the blizzard of rain and somehow compiling everything in some magically smooth order. We made it through toll booths and were running at about 120kmh+
Driving though what can only be described as the Basque country, quaint 16th century houses, green rolling hills, pine trees & some sort of mystical feel to the whole place.. “it really nice down ere” said the english surf instructor.
As we came around a corner this horrible metal clunk followed by a gut wrenching metal grinding on asphalt..I turned around in the back seat in horror to see the back wheel totally off the trailer and rolling like a bat out of hell past the car.. FUCK!
Somehow Vincent our resident water patrol/ big wave surfer steered the car onto the side of what the road.. what little side of the road we had… What we didn’t realise was that we were in fact on top of a 100 meter high two lane (dont pull over here) bridge. FUCK! 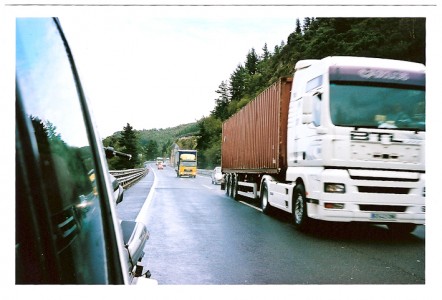 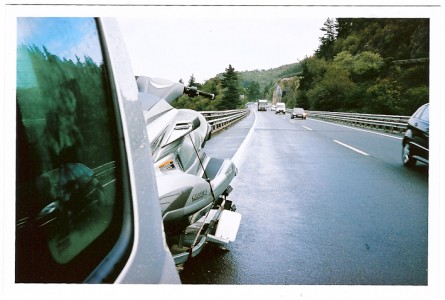 *NOTICE THE ABSENCE OF THE TRAILER WHEEL!

As reality kicked in and semi trailers roared past at 100kmh+, whilst frantically trying to form one lane to avoid turning us into insects on the front grill. We were literally sitting ducks.
I was on the road side of the car stuck between a child proof door and 7 surfboards.. Going absolutely no where! I literally started to wait to get hit..
While i thought it was due to the people in the car shaking.. we soon realised that the bridge was actually shaking everytime a semi-trailer went past.. Every couple of minutes a truck would rumble past..as a constant reminder that it wasn’t ‘if’, but ‘when’ we would get hit and thrown over into the valley below.. Living the R.I.P Curl search
Still no Policia.. Where are they when you need them!? It started to rain…FUCK! The last thing we need is heavy rain to prevent oncoming trucks from seeing us..
After a while the rain eased and we piled out to greet the Spanish new age savior/ Rescue response man, with massive truck and flashing lights to warn of broken down motorists.
He parked way up the highway providing much needed attention to apathetic truck drivers.. who by this time seemed to be getting closer & closer. As we stood there in the small space between the guard railing and the bridge railing, looking down over into the valley below.. out of nowhere the back window exploded! A rock? No..no truck.. what the fuck??
I eventually figured that the tension from pulling a trailer with no wheel.. and tension from holding a one wheel trailer tweaked out the chasse forcing the window to smash.
The tow man finally arrived after what seemed like hours.. and took the wretched jetski and broken trailer.. whilst we limped back to Hossegor with a broken back window.
Tomorrow we try to get the car back and the trailer.. and the ski…& our confidence.
We see.. If i dont come back.. 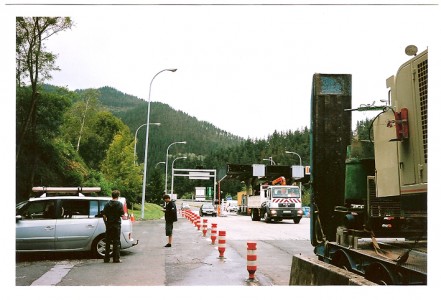 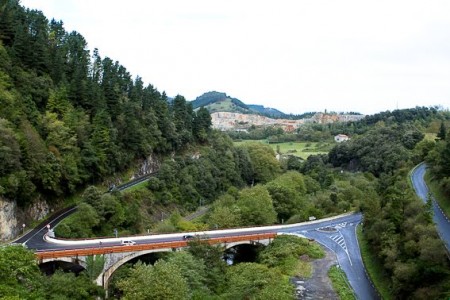